This competition was to drop a soft golf ball from a cup mounted to a model plane towards a target placed on the flying area with three attempts being allowed. A paper cup was attached to the model using rubber bands over the C&G to reduce the effects of extra weight/trim. The soft golf ball was then placed in the cup. 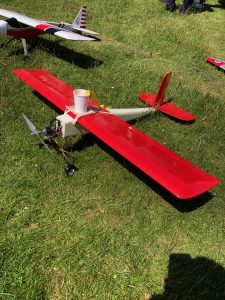 The model then took off into wind to perform a circuit when on completion of the first circuit the pilot may make a second pass and use a manoeuvre to release the soft golf ball towards the orange/white target. (NO RC device is to be used to assist in its release).

A total of 6 passes were allowed to discharge the soft golf ball, once discharged the pilot will be required to land to reload with another soft golf ball.

A total of 3 attempts will be given.

Note:- there will be no need to recover the soft golf ball between each attempt. 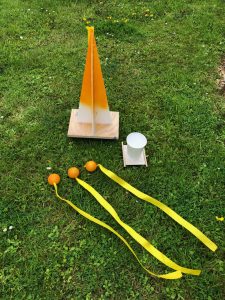 The scoring is as follows:-

A point is given for every foot from the target up to 60 feet .

Failing to discharge the soft golf ball within 6 passes will score 100 points.

All three scores will be added together and the pilot with the least score will be the winner.

Six members took part in these very windy conditions, there were some of very interesting manoeuvres to release the soft golf ball with some coming very close to the ground. On one occasion, someone stalled his plane so close to the target that he only just recovered it before hitting the ground quite hard removing its undercarriage, his last attempt being a hand launch.

The following are the results:

Alan Caldecourt being the overall winner he was awarded a prize of biscuits.

I would like to thank those who took part and hope they had an enjoyable time under quite demanding conditions.